The Habsburgs ruled most of present-day Slovenia until the Austro-Hungarian Empire was split up following the First World War; the territory then became part of the new state of Yugoslavia, the capital of which was at Belgrade in modern Serbia. Slovenia seceded from the Yugoslav federation in 1991. The country’s present borders encompass territory that historically formed parts of Habsburg-dominated Carniola (central Slovenia), Styria and Carinthia, as well as Hungary and Italy. These different territories had rather different Jewish histories. Slovenia today encompasses about 20,000 square kilometres, with a short coastline on the Adriatic.

Jews were probably present in the region in ancient times, perhaps in such Roman towns as Emona (near the site of today’s Ljubljana). This presence is confirmed by several small but significant archaeological finds, in particular an oil lamp inscribed with a menorah found in a cave near Skocjan and probably dating from the fifth century. There is no evidence, however, of continuity between this period and the twelfth century, when Jewish settlers are known to have arrived in the region from the north (many seeking refuge from the Crusaders) and from Italy.

By the 12th or 13th centuries there were Jewish communities in many parts of what is now Slovenia. Such towns as Piran, Koper, Izola, Ljubljana, Maribor, Radgona, Slovenj–Gradec, Olmos, Celje, and Ptuj had Jewish quarters during the Middle Ages. (The 17th-century Slovenian historian Janez Vajkard Valvasor wrote that Jews built a synagogue in Ljubljana in 1213, after a fire destroyed the previous building. Modern historians have questioned this, given that the settlement itself had only just been founded and that the records of important towns such as Maribor suggest Jewish settlement only toward the end of the 13th century.)  In most of these places, communal and religious life was well organized and the community engaged in trading and moneylending. Documents indicate that Jews in Styria also owned property, including houses, vineyards, fields and mills.

This era of prosperity ended on 18 March 1496, when, pressured by the nobility, the Holy Roman Emperor Maximilian signed an edict ordering the expulsion of Jews from Styria and Carinthia. The order came into force on 6 January 1497. In 1515, the Jews were also expelled from Ljubljana. Subsequently this core area of modern-day Slovenia remained essential empty of Jewish settlement. It is in areas formerly in other jurisdictions (such as Hungary and Italy) that post-medieval Jewish heritage sites are found today.

The material provided here is for information only; we have striven to make sure links are  valid — let us know if something doesn’t work.  JHE declines responsibility in case of problems. 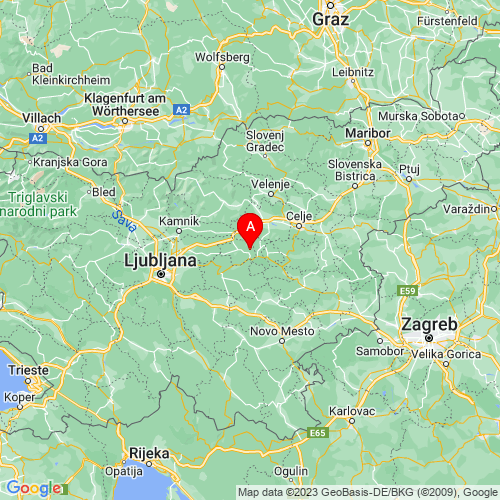