There are few Jews in Cyprus today, but the island has played an important role in Jewish history. Cyprus was home to a substantial Jewish population in antiquity, and Jews from the island fought in the Jewish revolt against Rome and were banned from returning after their defeat. An inscribed column, probably dating from the 4th century, records (in Greek) the third-century renovation of a synagogue, so Jews must have been allowed to resettle. The stone is in the collection of the Cyprus Museum, Nicosia. In all, ancient synagogues are known from epigraphic evidence to have existed in at least three locations: Golgoi, Lapethos, and Constantia-Salamine.

By the late Middle Ages new Jewish communities had developed in Nicosia, Paphos and Famagusta. Few records exist of the Jews during the ensuing Ottoman period. After the establishment of British rule in the 19th century there were attempts to found Jewish agricultural settlements but they met with little success. Many refugees made their way to Cyprus in the Nazi era, and in 1941 the entire community was evacuated to Palestine by the British. After World War II, the Britain established internment camps, often expansive ‘tent cities’, for Jews caught trying to enter Palestine ‘illegally’. Between 1945 and 1949 approximately 11,000 Jews were interned on the island. By 1963 approximately 130 Jews were living on an island that had become independent of British rule just three years earlier; the number later dwindled to around 25 because of emigration, mostly to Britain or Israel. (The number is believed to have grown to about 350 families in recent years, mainly people who moved there for business reasons from Israel, Russia and the U.K.) The island was bitterly divided (in 1974) into Turkish and Greek sections, and separated by a United Nations-policed ‘Green Line’. Cyprus joined the EU in 2004 as a divided island. The Greek section, or Republic of Cyprus,  is not recognized by Turkey. And the Turkish-controlled northern Cyprus – the self-styled Turkish Republic of Northern Cyprus – is recognized only by Ankara. 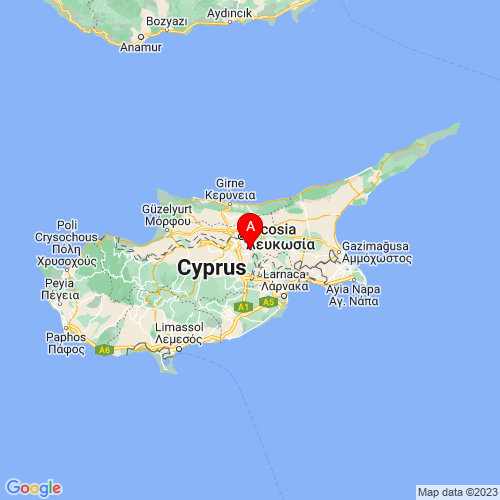